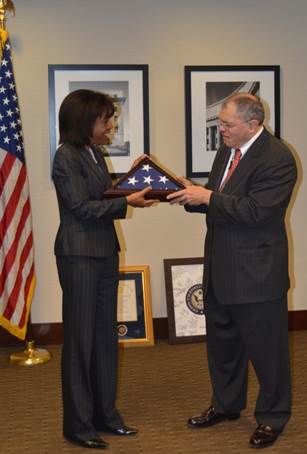 CBCA Vice Chair Somers presents Judge Borwick with a flag that flew over the U.S. Capitol on his last day of Federal service.

Concluding more than 43 years of Federal service, including 27 years as a Judge, Board Judge Anthony S. Borwick retired on December 3rd with the fond farewells of his colleagues and friends. Judge Borwick was born in Washington, D.C. in 1944. He attended Cornell University, where he earned a B.A. degree in 1967. He went on to graduate with his J.D. from Tulane University in 1970 and was admitted to the District of Columbia and California Bars.

Judge Borwick began his legal career as a trial attorney at the Department of Justice where he served until 1976, when he moved to the General Services Administration, Office of General Counsel, to head up the litigation section. He served in that position for ten years, and was then appointed to the General Services Board of Contract Appeals on May 11, 1986. Judge Borwick became a member of the Civilian Board of Contract Appeals at its creation on January 6, 2007.

The judges and staff of the CBCA extend their heartfelt thanks to Judge Borwick for his wise counsel, humor, and friendship and wish him the very best in his retirement.

Fall 2013 Legal Interns Complete Their Time with the Board 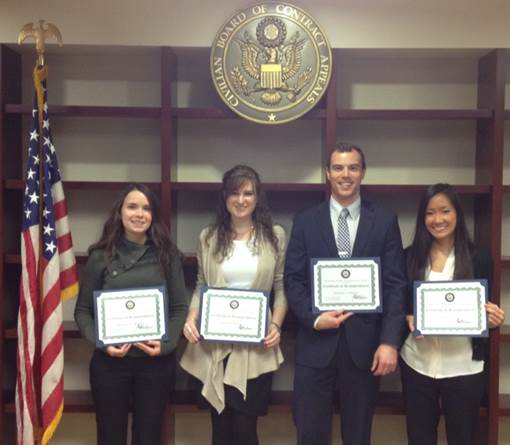 At left, the members of the Fall 2013 class of legal interns display their Certificates of Accomplishment at the conclusion of their internships with the Board.

The legal interns' assignments this Fall included, among other items, researching a differing site condition issue, a CDA certification standards matter, and a first article testing question for Board Judges.

Impact of Government Shutdown on Board Operations

If Federal Government operations are curtailed due to a lack of appropriations, the Civilian Board of Contract Appeals will remain open for the purpose of accepting filings from parties during what has been termed the shutdown period.

Any statutory limitations on the time within which a filing may be made will not be waived or tolled during this period.

With the exception of statutory deadlines, each judge has the discretion to modify the deadlines established in a specific case that occur during and after this period.

Judges Anthony Borwick, Patricia Sheridan, and Richard Walters took on various "roles" in a program titled ADR at the Courts and Boards on June 12, 2013. The judges played the parts of mediator and contracting officer in the role play which illustrated how a government contracts mediation proceeding might play out in practice. Also taking part in the event, and playing other "roles" such as government or private attorney and company owner, were judges from the Armed Services Board of Contract Appeals and the Federal Aviation Administration Office of Dispute Resolution for Acquisition. Judge Marian Blank Horn from the U.S. Court of Federal Claims served as commentator on the proceeding. The event was held at the offices of the law firm Jenner & Block in Washington, DC and was sponsored by the American Bar Association's Public Contract Law Section, Contract Claims and Disputes Resolution Committee.

Judge Jeri K. Somers, the CBCA Vice Chair, will co-teach a course on the craft of judging at the George Washington University (GWU) School of Law during the upcoming Summer of 2013. Joining Judge Somers will be Col. Denise R. Lind, the Chief Judge of the 1st Judicial Circuit of the U.S. Army Trial Judiciary. Judges Somers and Lind's course introduces students to the "craft" of judging-primarily trial judging-through examination of court opinions, written assignments, hypothetical problems and related readings. Topics will include the judicial selection process, how judges decide cases, finding facts and assessing credibility, judges and juries, the media and the court, and making the appellate record. The course is required for all GWU law students who take part in an internship.

Judges Harold "Chuck" Kullberg and Jonathan D. Zischkau will participate in the American Bar Association's Public Contract Law Section, Contract Claims and Disputes Resolution Committee "Ask the Judges" roundtable discussion covering all aspects of claims practice before the Boards of Contract Appeals. Judge Zischkau will serve as co-moderator of the panel with Judge Reba A. Page from the Armed Services Board of Contract Appeals (ASBCA). Judge Kullberg will serve on the panel with judges from the Government Accountability Office Contract Appeals Board, the District of Columbia Contract Appeals Board, the Federal Aviation Administration Office of Dispute Resolution for Acquisition, the Postal Service Board of Contract Appeals, the ASBCA, and the U.S. Court of Federal Claims. The event is on Thursday, February 14, 2013, from 12:00 p.m. to 1:30 p.m. at Jenner & Block, 1099 New York Avenue, NW, Suite 900, Washington, D.C.