The Board welcomes Ms. Ioana Cristei and Ms. Viviana Lowe who have been selected to serve one-year appointments as Honors Attorneys for 2016-17.

Ms. Cristei is a 2016 graduate of the George Washington University Law School, where she served as the Executive Editor of the Federal Circuit Bar Journal. Prior to earning her J.D., Ms. Cristei worked for a small government contractor in the General Counsel's Office, where she assisted in contract negotiations and regulation compliance. While in school, she interned with the procurement division of the Department of Homeland Security General Counsel’s Office, and with the General Services Administration Office of Inspector General, working on procurement integrity, employment, and False Claims Act issues.

Ms. Lowe is a 2016 graduate of the George Washington University Law School. While in law school, Ms. Lowe served as a Notes and Projects Editor of the Public Contract Law Journal. She also worked as a Student Attorney for the Small Business & Community Economic Development Clinic, assisting and counseling entrepreneurs in the incorporation, trademark protection, and incoming revenue of their small business or nonprofit organization. Ms. Lowe completed internships at the U.S. Immigration & Customs Enforcement, Commercial & Administrative Law Division, focusing on government contracts and property law issues, and the General Services Administration, Office of Inspector General, Office of General Counsel, where she worked on matters regarding the appropriations of agency funds under the American Recovery and Reinvestment Act.

In an investiture ceremony held on May 29, 2016, the CBCA was honored to have four new Board Judges take their oaths of office from the Honorable Todd M. Hughes, Circuit Judge, United States Court of Appeals for the Federal Circuit.

Judge Chadwick earned a B.A. from Harvard College, and a J.D., Order of the Coif, from Stanford Law School, where he was managing editor of the Stanford Law Review. After law school he served as an Associate with Spiegel & McDiarmid, LLP, as a Law Clerk to Hon. Pamela A. Rymer, Circuit Judge, U.S. Ninth Circuit Court of Appeals, and as an Associate with Morrison Foerster LLP. He later served as a Trial Attorney and Senior Trial Counsel with the U.S. Department of Justice, Commercial Litigation Branch, and as a Senior Litigator with the Federal Trade Commission, Bureau of Competition. Subsequently he became Senior Litigation Counsel with Sanford Heisler Kimpel LLP, and then a Trial Attorney with the U.S. Army Legal Services Agency, Contract and Fiscal Law Division.

Judge O’Rourke earned a B.A. from Dartmouth College, a J.D. from the University of Texas School of Law, and an LL.M. in Government Procurement from the George Washington University Law School. As a commissioned officer in the United States Air Force she served in multiple positions around the world including: Trial and Defense Counsel at Langley Air Force Base; Chief, Strategic Communications, Office of the Judge Advocate General at the Pentagon; Law Clerk with the U.S. Civilian Board of Contract Appeals; Trial Attorney in the Commercial Litigation Division of the Air Force Legal Operations Agency; Deputy Command Judge Advocate, Joint Contracting Command, U.S. Forces, Afghanistan; Staff Judge Advocate, Air Force Civil Engineering Center; and with the Administrative Law Division at the Pentagon. After retirement from the Air Force, she served with the First Responder Network Authority with the U.S. Department of Commerce.

Judge Russell earned a B.A. from Wellesley College, and a J.D. from George Mason University Law School. She served as an Attorney-Adviser with the Federal Highway Administration, in the U.S. Department of Transportation, and later as a Special Assistant U.S. Attorney in the U.S. Attorney's Office for the District of Columbia. She subsequently became an Assistant U.S. Attorney, in the same office, later serving as both Senior Litigation Counsel, and as an Affirmative Civil Enforcement Attorney. 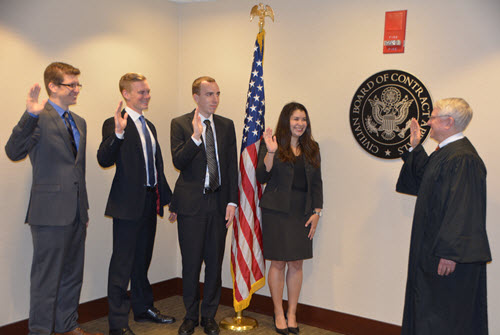 The Board recently bid two farewells in close succession to the long-time senior staff assistants for Chairman Daniels and Vice Chair Somers. Jean Ward and Diana Biggins were among the CBCA's original employees and both had long and distinguished Federal careers. They will be missed by their colleagues who wished them farewell recently at the Board's offices.

Diana Biggins – After a career spanning nearly five decades, Diana retired on October 29, 2015. Surrounded by past and present Board employees, Diana gave sincere thanks and a tearful goodbye. Chairman Daniels recognized her as the consummate professional, while Vice Chair Somers offered an anecdote about Diana’s outstanding, and surprising, shorthand skills. Diana’s Federal service includes time with the Bureau of Public Roads in the Federal Highway Administration, the multi-agency Northeast Corridor Project, the General Services Administration Board of Contract Appeals, and the CBCA.

Jean Ward – The Board celebrated Jean’s 42 year career and her many accomplishments at a luncheon ceremony attended by her friends and family. Jean began her career in 1973 with the GSA Federal Supply Service. Other than six months in 1974 at the Interior Dept., she continued at GSA until Dec. 1984, when she became an Legal Staff Assistant with the General Services Administration Board of Contract Appeals (GSBCA) where she stayed until 2007 when the CBCA was created. Over the years Jean was promoted many times and assisted judges including: GSBCA Judges Borwick, LaBella, Lieblich, and CBCA Chairman Daniels with whom she worked for 28 years.