CHANGES AT THE CBCA


Judge Erica Beardsely was appointed by the Acting Administrator of General Services to be the new Chair of the CBCA effective June 1, 2021. Judge Beardsley joined the CBCA in May 2016 and was appointed Vice Chair in 2017. She previously served as a law clerk to a Magistrate Judge in the U.S. District Court for the Eastern District of Virginia. After spending fourteen years in private practice, Judge Beardsley served as a trial attorney for the U.S. Army Legal Services Agency, Contract and Fiscal Law Division.

On June 1, 2021 the Acting Administrator of General Services appointed two new Vice Chairs to help lead the CBCA. Judge Harold D. "Harv" Lester, Jr. worked for several years in private practice before joining the National Courts Section, Commercial Litigation Branch, Civil Division of the Department of Justice as a Trial Attorney and eventually an Assistant Branch Director. Judge Lester was a faculty member of the National Advocacy Center for more than a decade and became a Member of the Civilian Board of Contract Appeals in July 2014.

Judge Beverly M. Russell was also appointed Vice Chair on June 1, 2021. Judge Russell began her legal career as an Attorney Adviser in the U.S. Department of Transportation. Judge Russell went on to serve as an Assistant U.S. Attorney in the U.S. Attorney's Office for the District of Columbia during which period she served as Senior Litigation Counsel and as an Affirmative Civil Enforcement Attorney representing the United States as plaintiff in civil cases. Judge Russell became a member of the Civilian Board of Contract Appeals in May 2016.


Judge Somers, Chair of the United States Civilian Board of Contract Appeals (CBCA) since October 1, 2017, retired on May 31, 2021. Judge Somers earned her Bachelor of Arts degree from George Mason University followed by a Juris Doctor degree from American University in 1986. Judge Somers served as a commissioned officer on active duty in the United States Air Force from 1986 to 1991, and in the United States Air Force Reserve and D.C. Air National Guard from 1991 to 2008. Judge Somers continued her federal service as a trial attorney with the Department of Justice from 1991 to 1994, and as an Assistant U.S. Attorney for the Eastern District of Virginia from 1994 to 2001. Prior to Judge Somers' appointment to the Department of Transportation Board of Contract Appeals in 2003, she worked as counsel for Miller & Chevalier. In 2007, Judge Somers became a member of the Civilian Board of Contract Appeals, where she was appointed Vice Chair in 2008, and Chair in 2017. Judge Somers currently serves as a valued educator in the field of government procurement law as both a Professorial Lecturer in Law at the George Washington University Law School and Adjunct Professor with the American University Washington College of Law. The judges and staff of the CBCA, both present and past, wish Judge Somers many years of happiness and joy in her future endeavors.


Judge Catherine B. Hyatt retired from the CBCA on May 31, 2021 after 35 years of government service. Judge Hyatt earned her Bachelor of Arts degree from Goucher College in 1974 with general honors and honors in economics. Judge Hyatt then completed the Juris Doctor program at George Washington University National Law Center in 1977 where she earned high honors and was a member of the George Washington Law Review and Order of the Coif. Judge Hyatt clerked for the Honorable Philip Nichols, Jr. of the United States Court of Claims (predecessor to the United States Court of Appeals for the Federal Circuit) from 1977 to 1978, and was an associate attorney with Arnold & Porter from 1978 to 1982. She was an attorney with Allied Signal Inc., Bendix Aerospace Sector, from 1982 to 1988. In 1988, Judge Hyatt joined the General Services Board of Contract Appeals, first as an Attorney Examiner and then, on November 6, 1988, was appointed as a judge. She became a member of the Civilian Board of Contract Appeals at its inception on January 6, 2007. Judge Hyatt's wit, wisdom, and ready smile will be missed at the CBCA, but the judges and staff wish her a happy retirement. 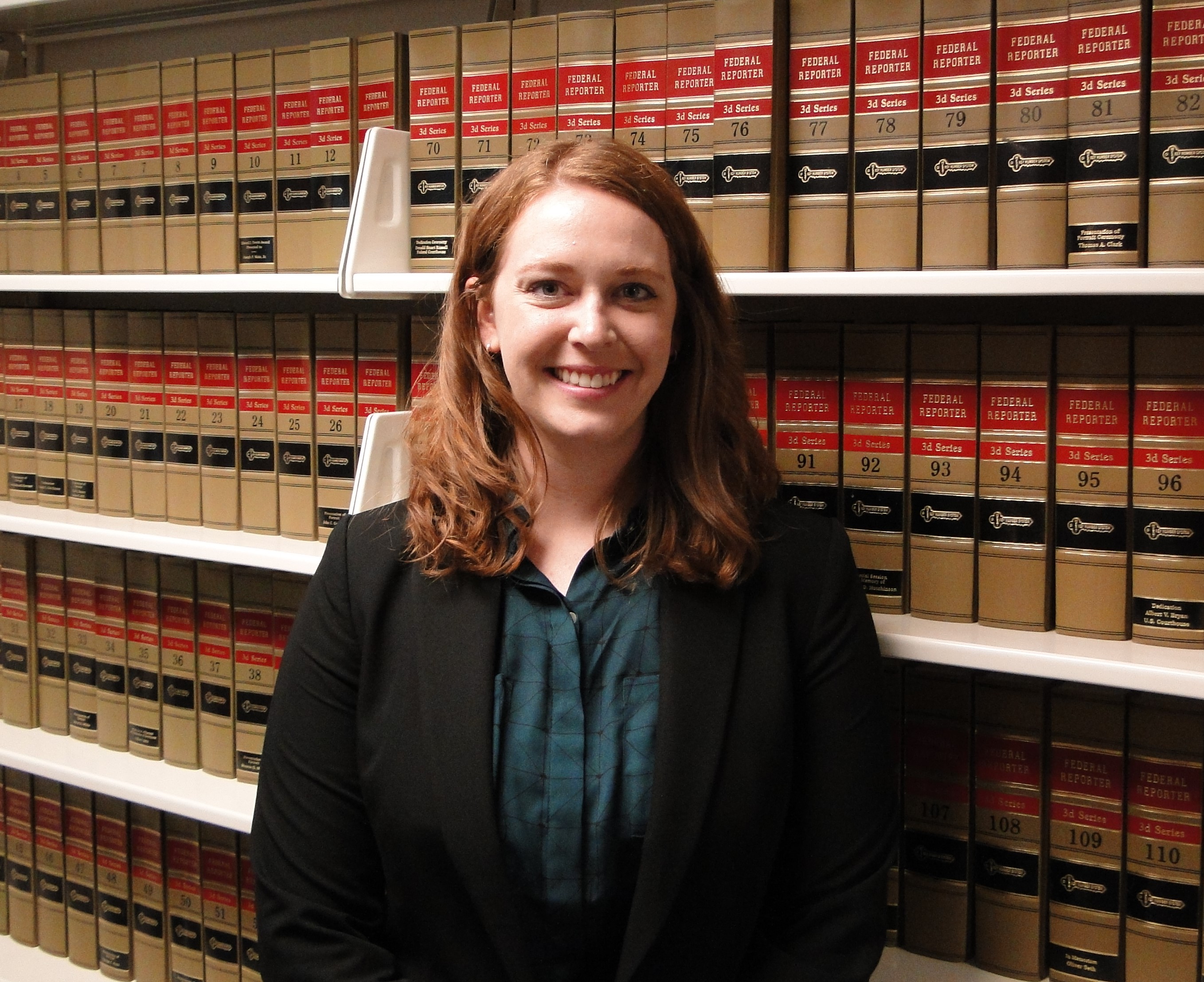 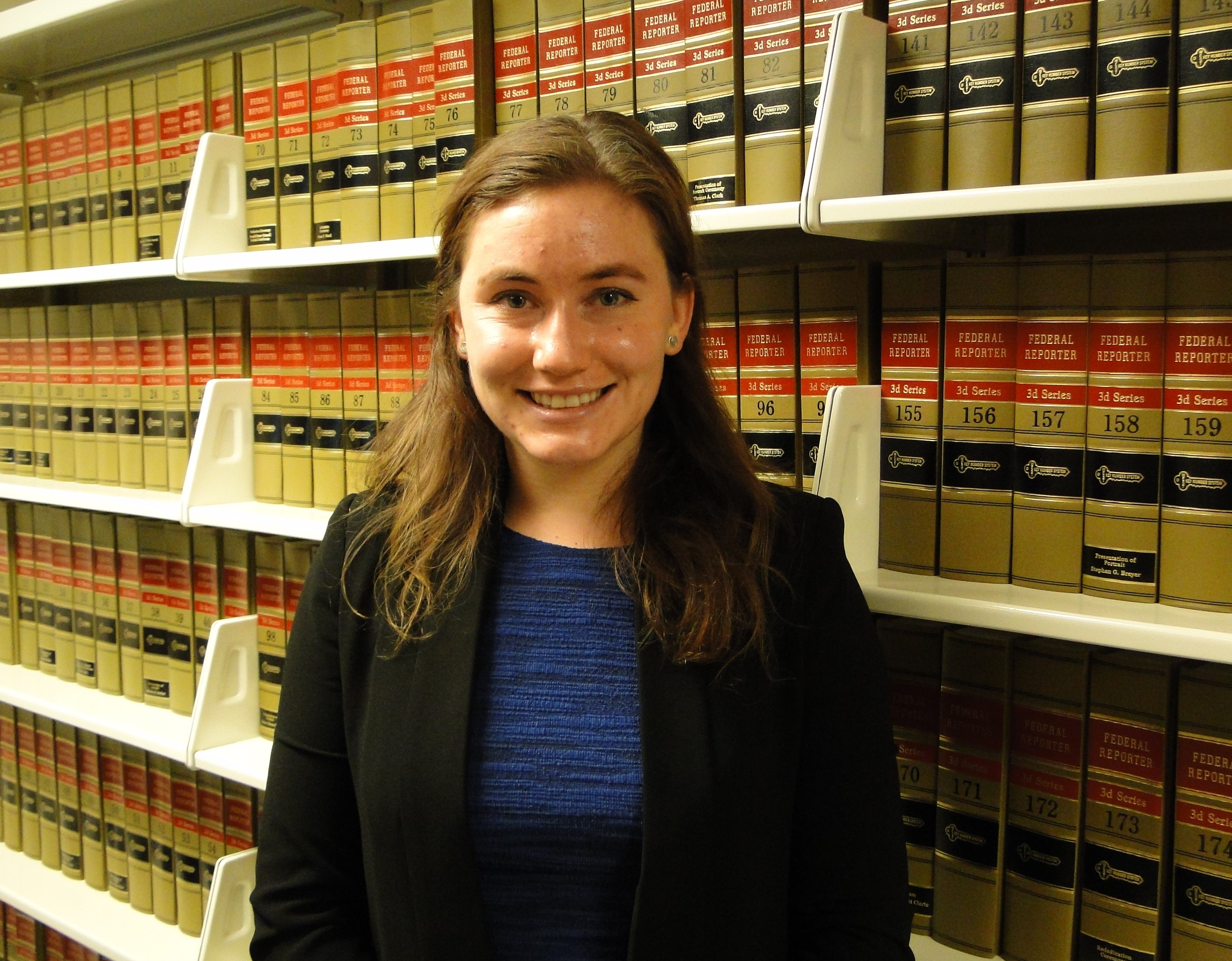 Kaitlyn Hodgman is a rising third year law student at The George Washington University Law School. She serves as an Articles Editor for the Public Contract Law Journal, is a member of the Moot Court Board, and has worked with Advocates for Justice, the DC Volunteer Lawyers Project, and the National Women's Law Center. Kaitlyn earned her undergraduate degree from Tufts University. 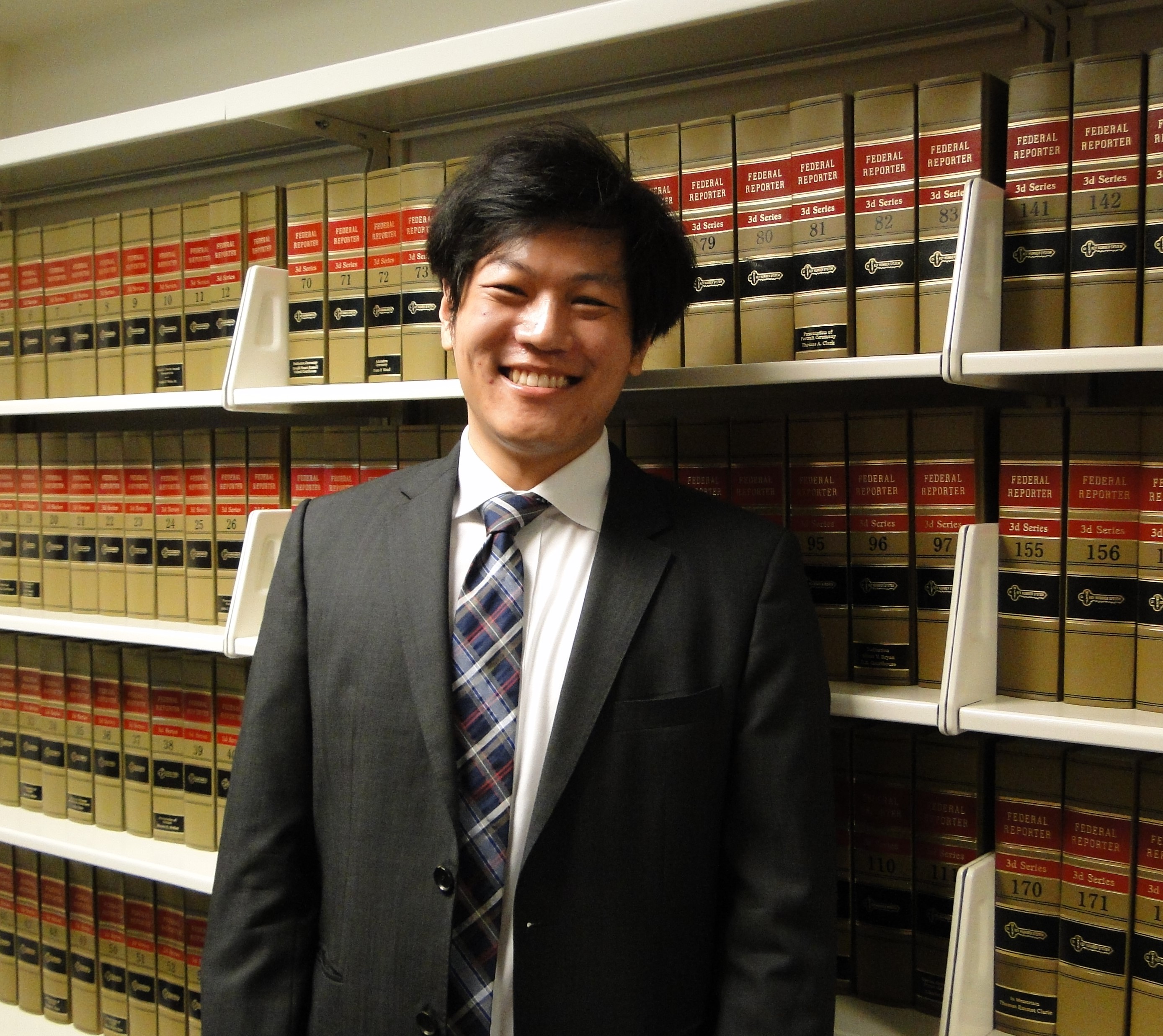 Kang Il "Thomas" Lee is a rising second year law student at the George Washington University Law School. He is a member of the GW Government Contracts Student Association and competed in the Alternative Dispute Resolution Competition. He holds a Master's degree in English Literature from Georgetown University and a Bachelor's degree from the University of Colorado at Boulder. 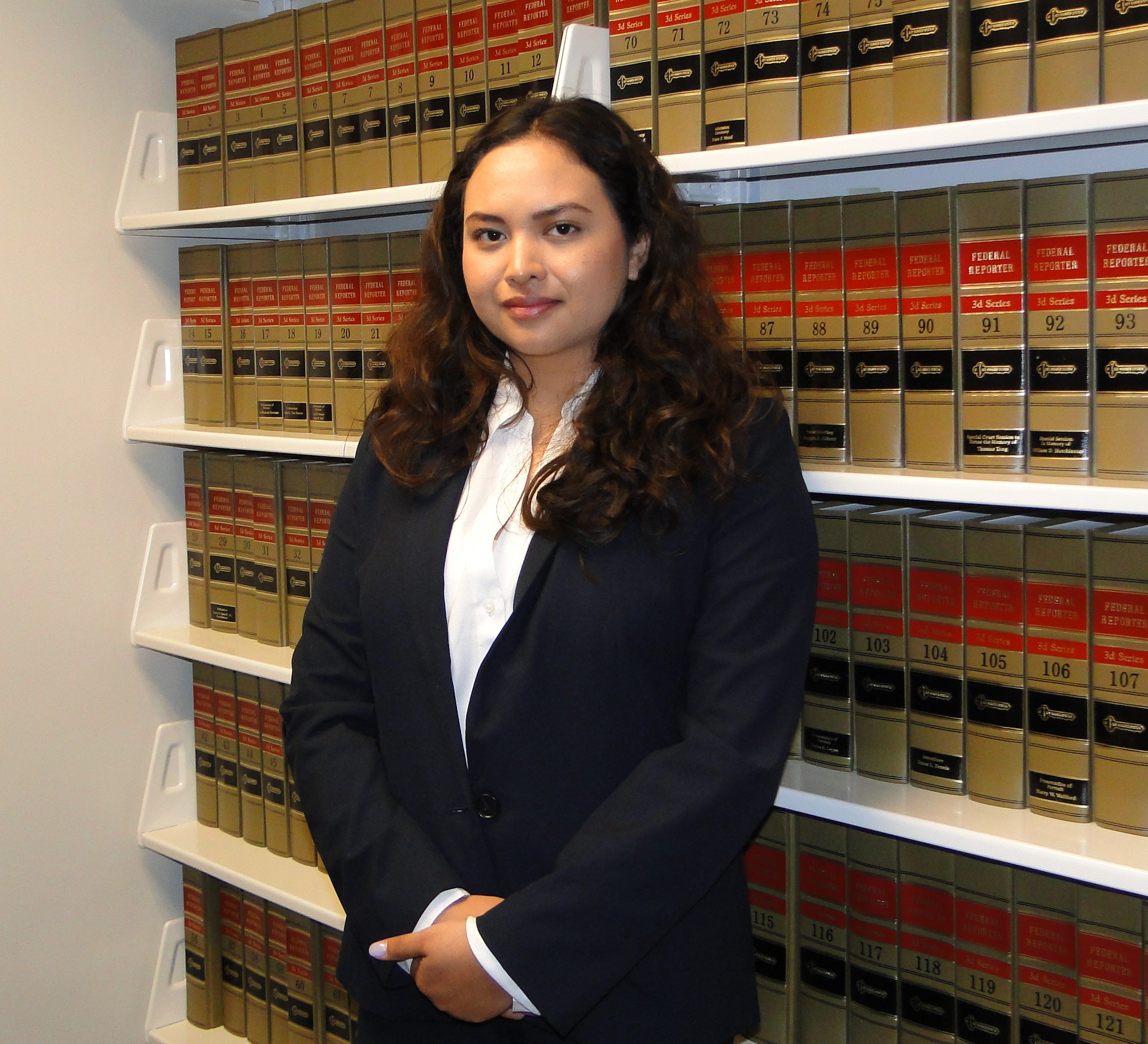 Abyselle "Abby" Salinas is a rising second year law student at the Tulane University Law School where she serves as a research assistant for the Immigrants' Rights Clinic and is a member of the International Criminal Court Moot Court Team. She holds a Master's degree from Washington University in St. Louis and a Bachelor's degree from Tulane University's Freeman School of Business.

CBCA GETS A FACELIFT

For everyone in the world, 2020 was a year of challenges and change. We at CBCA worked hard to rise to the challenges presented and were able to transition quickly from almost no telework to full-time telework for all employees within a matter of weeks. The Board transitioned to virtual hearings and arbitrations with very few hiccups and provided guidance and lessons learned to other administrative courts and panels.

In 2021, more change is afoot for CBCA, although this time it’s the good kind of change. When we return to our offices later this year, we will be greeted by newly remodeled office space. Those of you who have appeared in our courtrooms and sat in our common areas will notice new carpeting and a fresh coat of paint among other upgrades. We look forward to sharing the new space with you. In the meantime, here are some photographs of the completed project. 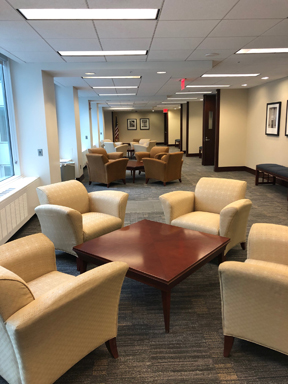 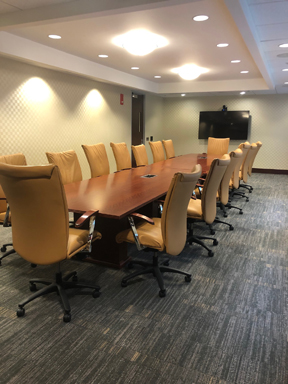 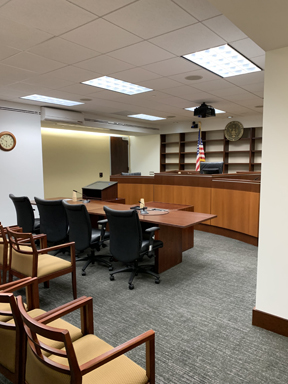